To share your memory on the wall of Louie Patton, sign in using one of the following options:

Print
Louie G Patton, 74 of Clio, went to be with his Lord and Savior Jesus Christ on July 11, 2020.
He was born on June 12, 1946 to George and Erla (Abbott) Patton and was a lifelong resident of the Clendenin area.

He gave his heart to the Lord on January 1, 2009. Shortly thereafter, he began singing with his wife Sharon in many churches throughout the region. He was proud to spread the Gospel to the thousands of people who had an opportunity to hear them play and sing.

He is preceded in death by his parents, brother Robin Patton, and sisters Patricia Carpenter and Lois Jean Fisher.

He is survived by his wife of nearly 51 years, Sharon (Chapman) Patton; son Kevin Patton and his daughter Stormi Williams; daughter Tamra Patton-Lott, her husband Dan, and children Lakota and LouMasi; son Jamie Patton, his wife Kimberly, and children Kaylee and Cade; and son Michael Patton. One great grandson Karson Sherwood. Additionally, he is survived by his sister Barbara Elmore and his brothers Kellar Patton, Mike Patton, and Rodney Patton.

He was a proud veteran of the Vietnam War and a 48 year member of the International Union of Operating Engineers Local 132. He also took pride in helping construct Interstate 79 from Charleston to Flatwoods as well as helping to build the Toyota plant in Buffalo. He was skilled in many trades and could be counted on by family, friends, and neighbors to supply his knowledge any time he was needed. He was a very generous and caring person and was well respected within his community. Above all, he loved his family and in return was a beloved husband, Dad, Paw Paw, brother, and friend.

Service will be 12:00 pm Friday, July 17, 2020 at Hafer Funeral Home, with Rev. Ray Williams officiating. Burial will be in Fairview Memory Gardens, Clendenin.

To send flowers to the family or plant a tree in memory of Louie G. Patton, please visit our Heartfelt Sympathies Store.

We encourage you to share your most beloved memories of Louie here, so that the family and other loved ones can always see it. You can upload cherished photographs, or share your favorite stories, and can even comment on those shared by others.

Posted Jul 18, 2020 at 12:29am
Louie was certainly special. I remember when we would help mom send special “packages” to him when he was in the service and the bond she always had with him. I remember being at your wedding when grandpa performed your wedding ceremony sitting there in his rocking chair. Always a smile for everyone. Will certainly will miss him as mom sure will. She will never forgot all the phone calls when they talked all night and up in the wee hours of the night. Much love to Louie and there will be no more suffering for him.
Comment Share
Share via:
IM

Posted Jul 14, 2020 at 11:52am
We have far too many fond memories of Louie to tell them all. One, was Iris and I coming in from Hawaii and attending many "famous" Patton cookouts. Louie at the grill, cooking burgers and hotdogs, bringing in a plate full and all the family scoffing them up like ravenous wolves, sipping Sharon's great lemonade. Followed by picture taking, frolicking with the children and, often, sitting on the porch and singing. Louie played the guitar and some of us (read me) singing out of tune the great old southern gospel songs of our youth. There was love and joy in those cookouts, now so sadly missed, never to be known again. So many memories, so many pictures, now to remain a part of past happiness's. Adding a bit more to our sorrow and loss. Sharon's, the family’s, the friends’ and our sorrow and loss. To my sweet sister Sharon and family, Phil and I are so sad for the loss of our dear brother-in-law Louie and send our heartfelt condolences. I pray to the good Lord to bless you and your family with much courage and love to help you all overcome this difficult time.
Comment Share
Share via:
DB

Posted Jul 13, 2020 at 07:34pm
Prayers & God Speed to & for the Family I have many memories of Louie when I was growing up there for a few years in my teens of the late nite coon hunts & mmm louie trying to ride a horse bare back up on the hill & getting bucked & thrown from the horse & rolling half way down the hill & me not being able to find him at first, an having me try & get a cat out of a well at 4am hollering about taking me to Dunbar & then Ruby White bring's me out a bowl of Ice cream that went over real well lol. Aunt Sharon our hearts go out to you durring this loss. R.I.P & Rest Easy Uncle Louie
Comment Share
Share via: 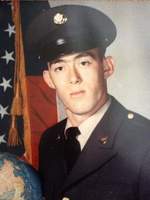