To share your memory on the wall of Delbert Runyon, sign in using one of the following options:

Provide comfort for the family of Delbert Runyon with a meaningful gesture of sympathy.

Print
D. Randall Runyon was a devoted brother, son, father, grandfather, and friend who valued faith in God, truth, justice, and loyalty to his family. He passed away at CAMC Memorial on March 25, 2020.

Although he fought glaucoma from birth ... Read More
D. Randall Runyon was a devoted brother, son, father, grandfather, and friend who valued faith in God, truth, justice, and loyalty to his family. He passed away at CAMC Memorial on March 25, 2020.

Although he fought glaucoma from birth until the end of his life, he did not let vision loss keep him from accomplishing his goals or enjoying life. He played in the high school band and enjoyed playing several instruments. He earned a bachelor's degree before the age of twenty and his MBA shortly after that. He worked as a teacher and later as a disability claims examiner. After his retirement he managed rental property and took care of his family members. He was known for his gift of gab and love of knowledge.

His proudest achievements were being a devoted father, caring for both of his parents at the end of their lives, and being a loving grandfather to his grandkids who referred to him as Tahiti – a nickname he chose because he had always wanted to sail to the island of Tahiti.

He was preceded in death by his parents, Holly and Irene Runyon, and his brother, Larry Runyon. He is survived by his daughter, Elizabeth Runyon Jarrett (and her partner Jeffrey Albright), his grandchildren and step-granchildren, Maya Jarrett, Eli Jarrett, Nadia Miller, Kieran Albright, and Dylan Albright. He is also survived by a nephew, Michael K. Runyon, three nieces, Kim Runyon Wilds, Tonya Runyon Whitehair, Jody

Runyon Honaker and their children. He is also survived by aunts and uncles on both sides and many beloved cousins who were so kind to him throughout the years. Many thanks to Irvin Hoffman who took him on some of the best adventures of his life, to Carolene Hoffman who helped him with accounting for many years after his vision became very limited, and to Colleen Mooney who helped to care for him at the end of his life.

A small service will be held in his memory on Saturday, March 28 at 11:00am for family members only (due to current safety precautions). Family and friends are asked to share favorite stories and memories with the family at www.haferfuneralhome.net (or send by mail to 50 N Pinch Rd, Elkview, WV 25071) or by email to

To send flowers to the family or plant a tree in memory of Delbert Randall Runyon, please visit our Heartfelt Sympathies Store.

We encourage you to share your most beloved memories of Delbert here, so that the family and other loved ones can always see it. You can upload cherished photographs, or share your favorite stories, and can even comment on those shared by others. 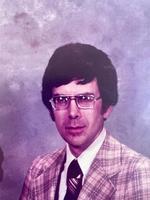