To share your memory on the wall of Terry Elmore, sign in using one of the following options:

Terry was born on April 23, 1960 to Lawrence Barch Elmore and Barbara Patton Elmore in Charleston, WV. He was a wonder... Read More
Terry Elmore

Terry was born on April 23, 1960 to Lawrence Barch Elmore and Barbara Patton Elmore in Charleston, WV. He was a wonderful son who deeply loved his parents. Terry graduated from Walton High School in 1978. He married his wife Dawn Machusak Elmore in 1981. He was a member of Pipefitters Local 274. He was also a member of the Clendenin Masonic Lodge 126 AF&AM.

Terry was a loving husband and father. Terry enjoyed fishing and being outdoors in his free time. He also enjoyed spending time with his wife, Dawn, and sharing new experiences together.

Terry is preceded in death by his father, Lawrence Barch Elmore, and his father in law, Paul Machusak.

A funeral service will be at 2:00pm on Thursday, May 6, 2021 at Myers Chapel of Hafer Funeral Home with Pastor Gary Blackwell officiating. Burial will follow at Staats Cemetery in Clendenin, with Masonic Graveside Rites.

In lieu of flowers the family has requested donations be made to Kanawha Hospice Care. 1001 Kanawha Blvd, Charleston, WV 25301

To send flowers to the family or plant a tree in memory of Terry Wayne Elmore, please visit our Heartfelt Sympathies Store.

We encourage you to share your most beloved memories of Terry here, so that the family and other loved ones can always see it. You can upload cherished photographs, or share your favorite stories, and can even comment on those shared by others.

Posted May 04, 2021 at 08:21am
Dawn, Makala, and Landon- I am so terribly sorry for your loss! My heart breaks for you folks. Please know that you are in my thoughts and prayers, cousins.
Love,
Leslie L. Haddad
Comment Share
Share via:
MP

Flowers were purchased for the family of Terry Elmore. Send Flowers 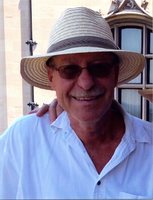