To share your memory on the wall of Terry Waite, sign in using one of the following options:

Terry had a blood disease called hemophilia he fought with from birth he was a brave and a humble loving husband, father, pawpaw, and brother. Our lives were blessed thanks to him.
We wish to thank nurse Kim and staff at CAMC for helping him in his final hours.
Terry was an avid Christian who attended Pocatalico Community Church.
Due to Covid Terry's Family will have a private celebration of Terry's life.

There are no events scheduled. You can still show your support by sending flowers directly to the family, or planting a memorial tree in memory of Terry Lee Waite.
Plant a Tree

We encourage you to share your most beloved memories of Terry here, so that the family and other loved ones can always see it. You can upload cherished photographs, or share your favorite stories, and can even comment on those shared by others.

Flowers were purchased for the family of Terry Waite. 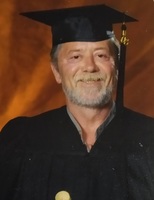