To share your memory on the wall of Richard McVey, sign in using one of the following options:

Richard graduated from Nuttall High School in Fayette County and afterward served in the United States Navy. It was during this time, while stationed in Boston, that he met Agnes. They married in 1946 and had three children, Beverly Fisher of Bowie, Maryland, George (Elaine) of Berkeley Springs, and Greg of Saint Albans.

Richard retired from the United States Postal Service, having held various positions including postal inspector, postmaster, personnel and finance director. He was an active member of Elkview Baptist Church for over 55 years where he served as deacon and Sunday school teacher.

The family would like to thank the staff at Glasgow Health and Rehabilitation Center for their care of Richard during his illness.

Due to COVID-19 restrictions, there will be no visitation. A private graveside service will be held for immediate family at Elk Hills Memorial Park, Big Chimney, West Virginia.

In lieu of flowers, the family requests donations to be made in Richard’s memory to Elkview Baptist Church, 910 Main Street, Elkview, WV 25071.

Online condolences may be sent to the family at www.haferfuneralhome.net.

To send flowers to the family or plant a tree in memory of Richard Audrey McVey, please visit our Heartfelt Sympathies Store.

We encourage you to share your most beloved memories of Richard here, so that the family and other loved ones can always see it. You can upload cherished photographs, or share your favorite stories, and can even comment on those shared by others.

Posted Oct 15, 2020 at 07:05pm
Our thoughts and prayers to the McVey family. Dick was a great mentor, friend and spiritual example to me over the years. We will dearly miss him, great memories will live on into eternity as we will be reunited in God's kingdom.
David and Rachael Duff.
Comment Share
Share via:
JD

Posted Oct 15, 2020 at 10:19am
What an inspiration and blessing this man of God has been. We are honored to have known and worked with him at Elkview Baptist!
Thank you, Dick, for your faithfulness. Your life has touched all of us!
We pray for strength and encouragement for all the family. God bless all of you!
"The steadfast love of the Lord never ceases. His mercies never come to an end--they are new every morning.
Great is your faithfulness." (Lam 3:22,23) Love in Christ--Jim and Sue Damron
Comment Share
Share via:
J

Posted Oct 14, 2020 at 05:52pm
So sorry about your loss Mr McVEY Wa very special he was my sunday school teacher for many years my first at EBC will always remember him he as always so kind and friendly. We send our thoughts and prayers to Carolyn and family . Loved Agnes,too went to LADIES FELLOWSHIP with her. So many memories of the kids too. May God give you comfort and peace in knowing he is with his Saviour. Gpd bless all.
Comment Share
Share via:
CS

Posted Oct 14, 2020 at 04:30pm
Dear George, Beverly and Greg,
so very sorry for the loss of your father. Prayers for you all and your families.
Carolyn Strickland Spurgeon
Comment Share
Share via: 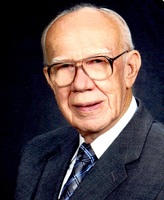