To share your memory on the wall of Brig. General James McLaughlin, sign in using one of the following options:

Provide comfort for the family of Brig. General James McLaughlin with a meaningful gesture of sympathy.

He was born on December 7, 1918 in Braxton County, West Virginia to Almira Ballengee McLaughlin and former Commissioner of Agriculture, James Blaine McLaughlin.

A graduate of Charleston High School and West Virginia University, Kemp joined the Army Air Corp, and arrived in England with the 92nd Bomb Group in 1942. From there he led over 39 B-17 combat missions throughout WWII, including the invasion of North Africa and the raid over Schweinfurt Germany. General McLaughlin authored The Mighty Eighth in World War II in which he described his time during the war and the missions in which he flew.

In 1947 he founded the West Virginia Air National Guard, where he served as commander and retired in 1977.
Kemp served as Kanawha County Commissioner from 1962-1968, was a member of the West Virginia House of Delegates from 1974-1976, President of the Charleston Exchange Club, Chairman of the Kanawha Clay Chapter of the American Red Cross, a board member of the Salvation Army, and served roles in many other organizations throughout the Kanawha Valley. He founded Elk Hills Memorial Park, and was a member of First Presbyterian Church, Charleston.

He is preceded in death by his wife of 49 years, Constance Bailey McLaughlin, his parents, and sisters, Mary Virginia McLaughlin and Elinor McLaughlin.

Funeral services will be held 10 am on Monday, December 23, 2019 at First Presbyterian Church of Charleston, with Reverend Dr. Nancy Kahaian. Visitation will be one hour prior to the service at the church. Burial will follow at Elk Hills Memorial Park, Big Chimney with military honors conducted 130th McLaughlin Air National Guard Honor Guard Team.

In lieu of flowers, the family request that donations be made to the University of Charleston Constance B. McLaughlin Scholarship Fund, or Hospice Care, 1606 Kanawha Blvd. West Charleston, WV 25387.

We encourage you to share your most beloved memories of Brig. General James here, so that the family and other loved ones can always see it. You can upload cherished photographs, or share your favorite stories, and can even comment on those shared by others.

Posted Dec 19, 2019 at 10:49am
I want to send my deepest sympathies to the entire family. The General was a wonderful man that I got to know when I took care of him. A True Hero he was. I will miss him terribly.
Comment Share
Share via:
SM

Posted Dec 18, 2019 at 09:46pm
On behalf of the Second Schweinfurt Memorial Association please accept our condolences. Your father was an inspiration to us. The highest example of leadership by example will be remembered.
Comment Share
Share via: 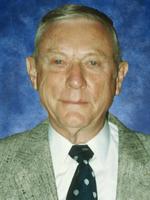