To share your memory on the wall of Charles "Charlie" Hanson, sign in using one of the following options:

Provide comfort for the family of Charles "Charlie" Hanson with a meaningful gesture of sympathy.

Charlie never met a stranger and made many friends in his short time in Raleigh, NC. Charlie had a heart for people, servitude to church and the many Ministers and congregations he was lucky to have met. Helping and Service was what he enjoyed in addition to his family.

He is also survived by many nieces, nephews and great nieces and nephews who will miss his humor and wit.

Charlie loved his family deeply and moved from Florida to NC to be closer to his children and grandchildren whom he realized were growing up quickly. His grandchildren were lucky and blessed to have had the little time they had with their papaw.

Charlie always had a kind word and smile for everyone he met even to the end.

The family would like to express their gratitude to WakeMed and especially Marcy and Micky on floor 5 B. We would also like to thank the Transitions Home for their wonderful care the last 7 hours of his life.

Service will be 1:00 pm Saturday, Feb. 23, 2019 at Hafer Funeral Home with the Pastor Mike Tackett officiating. Burial will be in Elk Hills Memorial Park, Big Chimney.

Visitation will be one hour prior to the service at the funeral home.

We encourage you to share your most beloved memories of Charles "Charlie" here, so that the family and other loved ones can always see it. You can upload cherished photographs, or share your favorite stories, and can even comment on those shared by others.

Itch, Rick, Pam, Jacob & Caitlin Fitzgerald, The Cummings Family Doug, Misty, Brett and Alyza, and others have sent flowers to the family of Charles "Charlie" Hanson.
Show you care by sending flowers

Posted Mar 12, 2019 at 01:25pm
Dear Family & Friends, I am so sorry for your loss. I didn’t know Mr. Hanson personally, but I do know the pain that comes from the loss of a dear loved one and what has brought me comfort. Please accept my condolences to your family, death of a loved one is never easy to accept. Our Creator, Jehovah God has made a promise to end death forever; this promise can be found in his Word the Bible at Rev. 21: 3 & 4. Please accept this as truth: that our creator will restore life on a perfect earth where pain and death will be NO MORE.
Comment Share
Share via:
IF 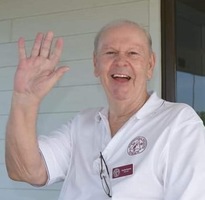